This is how we organise transport in Budapest

On an average workday in the capital city, the daily number of passengers using public transport services is 1.3 million. Passenger transport on a single day is provided by a total of 2,200 buses, trams, trolleybuses, metro and suburban railway trains, which have more than 43 thousand departures combined.

This, even in European comparison, dense transport network would not be able to work without the preparatory work done by BKK’s engineers. The transport organiser is responsible for assessing travel demand, keeping track of all vehicles operated by the service providers along with driver headcount and all data required for line routing and scheduling.

This is how metro replacement buses operate in peak periods:

The largest public transport service provider in Budapest is in-house operator Budapest Transport Company (BKV Zrt.), but a few years ago, additional companies became service providers. BKK supervises and monitors services to ensure that quality is appropriate and uniform irrespective of who the provider is, meaning that while travelling, the passenger should not be able to tell the difference between contracted operators.  Our colleagues continuously check service quality on the street, at stops and on board vehicles, and in extreme cases BKK will collect penalty payments from non-complying partners.

At the BKK FUTÁR Traffic Control Centre, 31 BKK employees make sure by overseeing traffic that your bus runs according to schedule and arrives on time during the day. A single traffic-control staff member is responsible for ensuring the consistent level of transport provided by 70-80 street-level vehicles. Some 400 minor and major traffic disturbances, delays, accidents, technical errors occur on a daily basis, but luckily, you will become aware of only a small fraction of these. In case of a big problem, BKK’s disruption recovery team will make sure on site that transport services return to normal as soon as possible.

Our transport developments are ongoing to reduce traffic disruptions: that is why modern Solaris-Škoda trolleybuses have entered service. The modern vehicles are capable of running four kilometres without overhead wires.

The BKK Info service provides information about some 7,000 annual planned and unexpected transport service changes every day of the year on Facebook, through online and mobile apps, via sound-based messages on board vehicles and at stops as well as in radio programmes.

Micromobility in the capital city

BKK is responsible not only for public transport in Budapest, but also for the whole travel chain in the city. Our experts take part in the preparation and realisation of all major transport related changes and developments. While doing planning work, probably one of the most important aspects is to create as liveable a city as possible for everyone by coordinating transport solutions of different purposes and speeds.

Just like in other metropolises, the number of micromobility users is on the increase in Budapest: walking, cycling, scooters, roller blades, e-bikes, hoverboards and the like are supplementing other forms of transportation. Micromobility gives access to places in the city that are hard to reach by car or public transport. 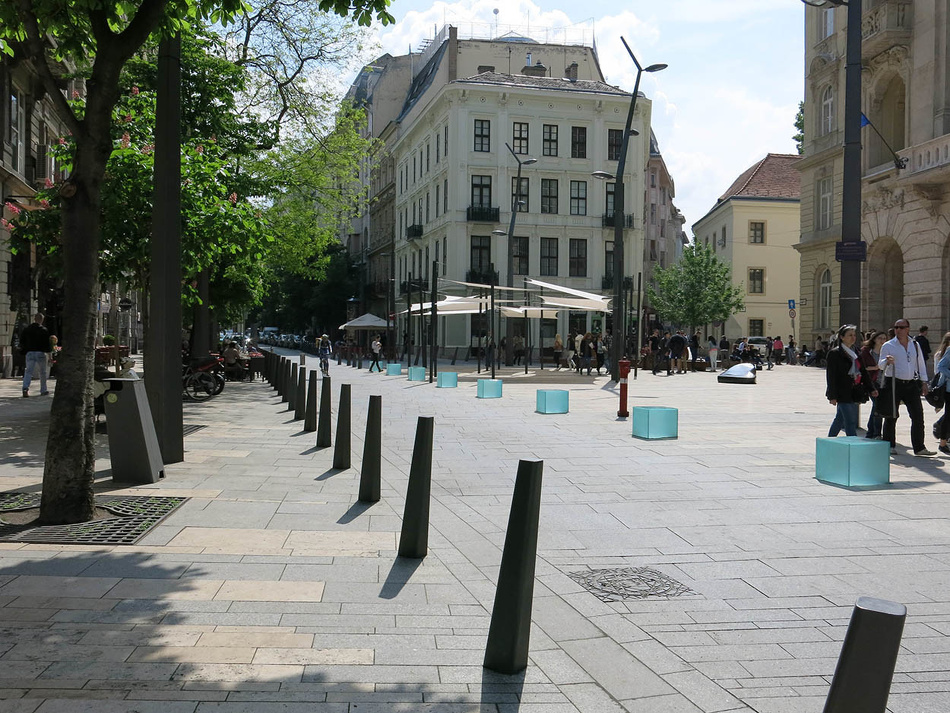 In 2020, Mobility Points were installed at four locations in the capital where customers have the services of public bike-sharing, e-bike, e-scooter as well as e-car sharing systems at their disposal in one place. User demand for the different types of vehicles are continuously measured at Szent Gellért tér, in Egry József utca, at Magyar tudósok körútja and at Infopark tram stop, so that the best possible solutions can be offered in transport development.

By rethinking the available cross sections of the streets, pedestrians, cyclists, e-scooter riders and all those using some kind of sharing based, preferably electric, means of transport get more space. It has already been demonstrated at numerous places in the capital in the past few years that traffic calming and the conscious reallocation of public space has a beneficial effect on both the natural and the built environment.

Even though the majority of commuters from the suburbs will drive their cars into the city, residents of the capital clearly prefer public transport, walking, cycling and other alternative solutions to private car use.