Transporting bikes on board street-level transport

BKK’s several public transport services can take your bike on board: boats, the cogwheel railway as well as several bus and tram lines. Bicycle traffic has increased due to the pandemic; therefore as a pilot, cyclists who also use public transport need to pay only their own fare, while their bikes ride free of charge at weekends. 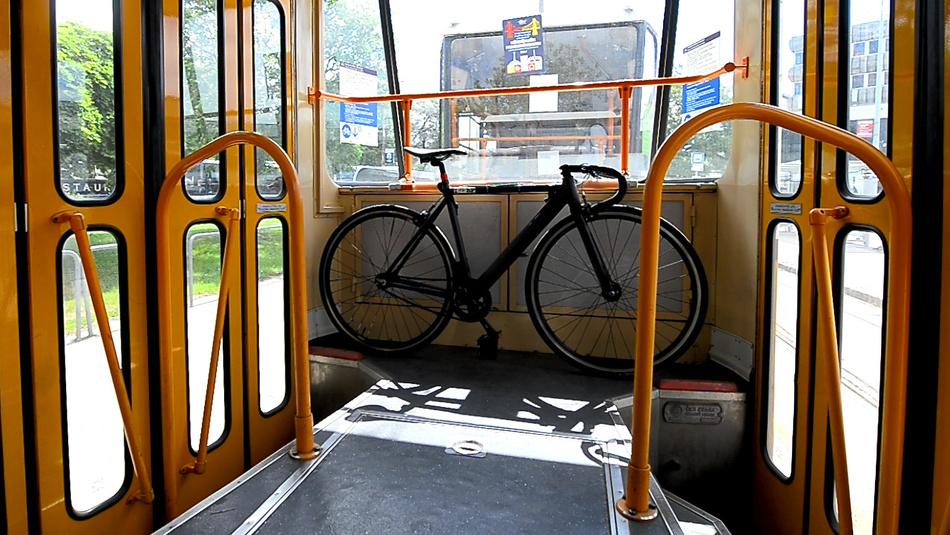 In what cases is it practical to carry a bike on public transport?

Passengers who regularly travel great distances and would like to combine cycling and public transport, in which case the BudapestGO journey-planning app is of great help, are advised by BKK to use B+R bike storage facilities or MOL Bubi public bikes.
In certain situations, it is very useful if you can take your bike aboard a bus or tram, such as a flat tyre, an e-bike’s dead battery, a summer storm, or the typical usage style on Buda’s hilly terrain: comfortably roll downhill in the morning, but on the way home, the going might get tough, in which case it is a good option to hop on a bus or tram instead of climbing uphill. Furthermore, this solution also helps the older generation or parents with small children who do not wish to go without the joy of riding a bike.

Which lines will take bikes on board?

At weekends and on public holidays:

Only Tatra type trams marked with a bike pictogram can transport bikes, which operate on the interconnected tram network in Buda on lines 41, 56, 59, and 61 (also on line 17 on weekdays) and in Pest on lines 1M, 12, 14, 28 as well as on line 1 on weekdays, and on line 37A at weekends and public holidays. The other types of tram operating on these lines are currently not capable of transporting bikes. We advise passengers to check bike-carrying options in the FUTÁR journey-planning app before leaving.
Additionally, the cogwheel railway (Tram 60), the listed buses, trolleybuses, ferryboat D14 and suburban railway trains can carry bicycles.

Where are the designated areas for transporting bikes on board?

The transportation of bicycles is allowed only aboard vehicles marked with a bike pictogram.

Only one bike per passenger is permitted. The size of the bike to be transported may not exceed 180x130x70 cm (length/height/width). Bikes that cannot be secured with the on-board Velcro fastener owing to their design are not permitted on trams (e.g. recumbent bikes).

It is the responsibility of the passenger to secure the bike safely.

This is how to transport your bike on trams:

This is how to transport your bike on buses:

On board buses, the designated area for bikes is facing the second /middle door, and it is also used for transporting baby carriages. One bike per bus is allowed. The door to be used for boarding with a bike is marked with a bicycle pictogram on dedicated buses whose front side also has a pictogram to indicate that the bus can take a bike on board.

On board Tatra trams, the transportation of one bike per car is permitted (a total of two bikes per tram) in the area marked with a pictogram, closest to where the two cars are connected (at the end where there is no driver’s cabin), while in the case of three-car trams, three bikes can be transported altogether. Bikes need to be fastened using the provided hook-and-loop (Velcro) fasteners.

On the cogwheel railway (also known as tram line 60), the transportation of up to 16 bikes is permitted in the area by the rear door of the car facing uphill.

On suburban railway trains, up to four bikes are allowed in the designated area in the middle car of each train. A bicycle pictogram painted on the platform of suburban railway stations indicates the door to be used for boarding with bikes. (Please note that you are not allowed to place your bike outside the designated area on board even if the area is full, as the bicycle may block passenger movement or it can even lead to accidents.)

On certain vehicles, the area designated for bikes is also shared by wheelchairs and baby carriages, therefore bike users are kindly asked to give priority to boarding wheelchair passengers and those travelling with a baby along with a baby carriage. In case of disputes, BKK will take the passenger who has boarded first, or was the first to arrive at the stop.

The driver may deny boarding with a bike if the vehicle is crowded or if fastening the bike is not feasible for some reason. 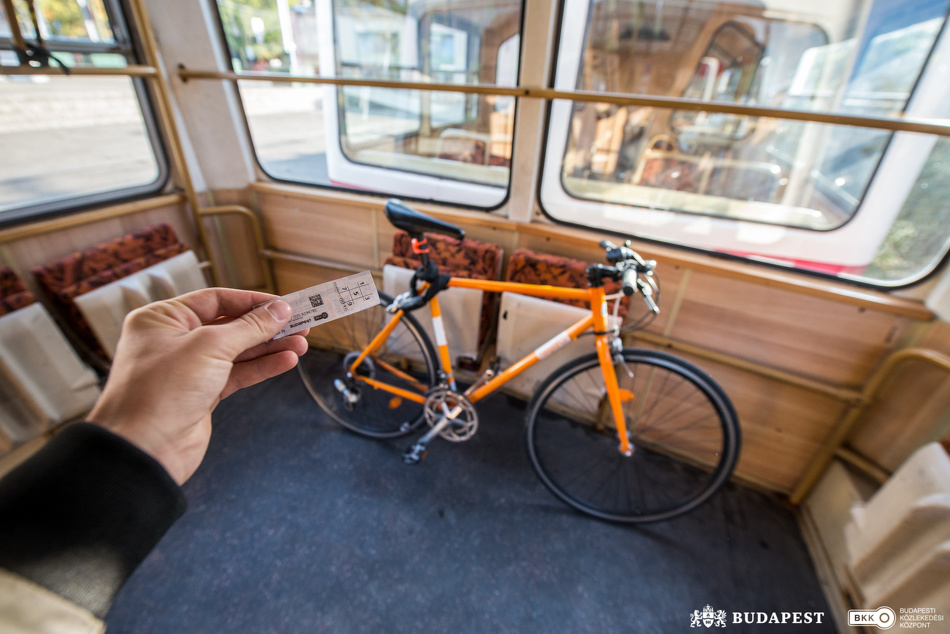 What type of ticket is required for transporting bikes?

During a test period from September 2020 expected to last until October 2021, cyclists can take their bikes on board suitable vehicles free of charge at weekends, in other words, only the passenger needs a ticket/pass for the ride. The development of the bicycle transportation service is in line with the Budapest Restart programme taking into consideration the increased level of bicycle traffic resulting from the pandemic.

The bicycle pass is purchasable to supplement most pass types at BKK ticket offices and from vending machines.

Even passengers entitled to free travel on BKK’s services require a bicycle pass with the number of the photo ID used for free travel to be indicated on the pass. The bicycle pass is valid only together with the original photo ID and it is not transferable.

The transportation of small-size bicycles with an outer wheel diameter of maximum 41 cm (16”), scooters and folding bikes with no size limitation is permitted free of charge as hand luggage on all lines, provided the carried items do not pollute or damage fellow passengers and the vehicle’s equipment.

What to do when the front-door-only boarding policy applies on a vehicle?

Prior to getting on, you need to present the required tickets or passes (fares for both passenger and bicycle) to the driver at the front door and then proceed to the designated (middle or back) door for boarding with the bike. The bike needs to be securely fastened before departure.

Tips on how to transport bikes

Bikes on board trains by Hungarian State Railways (MÁV): https://www.mavcsoport.hu/en/mav-start/domestic-travels/faq-domestic-travel

Bikes on board the Children’s Railway: https://gyermekvasut.hu/en/prices/

Cycling
Maps
Bikes on board