The Buda Castle Funicular has been a link between the riverbank of the Danube and Buda Castle since 1870. The special railway runs on a 95-metre-long track surmounting a gradient of 50 metres while affording riders captivating views of the city below. The Funicular was listed as a UNESCO World Heritage Site in 1987.

From 10 to 14 October 2022, the Buda Castle Funicular will be out of service due to maintenance works. The Buda Hill Incline was inaugurated on 2 March 1870 with the purpose of providing easy access to the government offices and the Castle Theatre situated in the Castle District.

Count Ödön Széchenyi, the son of István Széchenyi who was one of the greatest Hungarian statesmen, initiated the construction of the second such railway in the world, based on the one in Lyon, France. The construction site for the steam-powered cable railway was defined by traffic conditions of the time: the abutment area of the Chain Bridge on the right bank of the Danube was a major traffic hub of omnibuses crossing the bridge, the Tunnel completed in 1857 and the terminuses of horse-drawn trams. The engineering plans of the funicular were prepared by Ödön Jaruszek.

At the lower terminal at Clark Ádám tér, a bigger, more impressive station hall was erected to house the engineering equipment including the steam engine. At the upper terminal, a simpler reception building was set up.

During the Second World War, a bomb struck the Buda Castle Funicular on 20 December 1944. After the war, it was dismantled rather than reconstructed, and it was not until 1986 that the line was rebuilt with technical solutions meeting the requirements of the time, such as an electric drive. Glass buildings evoking the past were constructed in harmony with the historical, architectural surroundings. The traction equipment including the driving pulley with a diameter of three metres were relocated to the upper station.

The passenger cars named Gellért and Margit have three-tiered cabins each with a capacity of 24 passengers, and they are run parallel to each other while ascending and descending. The safety of operation is ensured by spring brakes which will stop the vehicle in the unlikely event a cable should break.
The journey time between Clark Ádám tér and the Castle is 95 seconds.

How to reach the Funicular 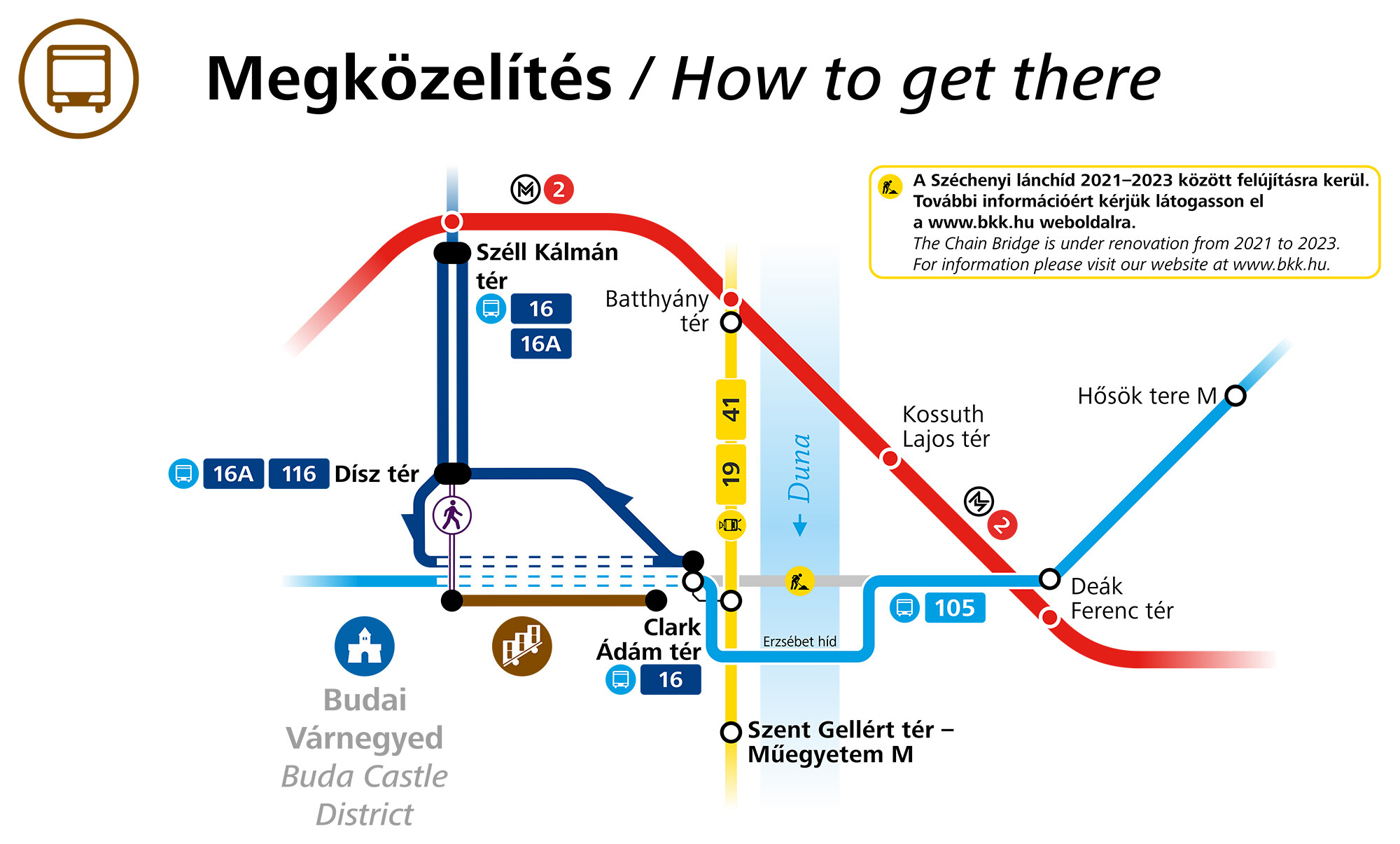 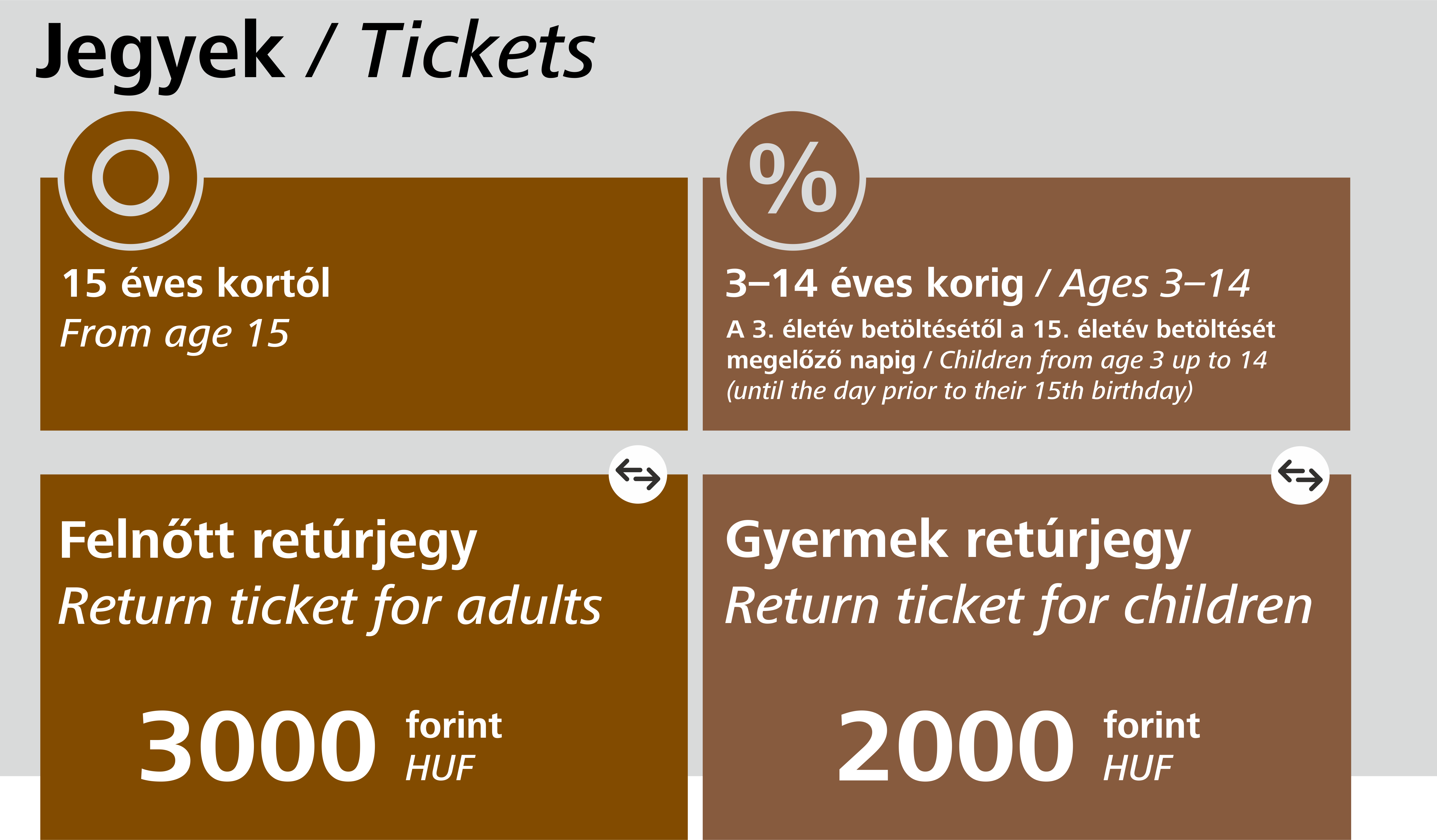 The Buda Castle Funicular is to be used free-of-charge under the age of 3.
Please note that pensioner and other types of discounts are not accepted.

Please note that in possession of the Budapest Card Plus, you are entitled to free travel in both directions.
You can get the free Funicular ticket for a round trip on the spot.

You are entitled to use the services of the Buda Castle Funicular only, in possession of a ticket on sale by BKV Zrt. on the spot in the Funicular’s ticket office. The Funicular ticket gives entitlement to one round trip for one year calculated from its purchase. Other tickets or passes issued by BKK, travel certificates or other documents certifying the right for free travel do not apply to the Funicular.

Before your ride, you need to validate your ticket with the validating machine. The validated ticket is not transferable to any other person. Please keep the sales receipt for your ticket during your journey and then until you leave the station.

Important rules to respect during your ride

The following persons will be denied travel:

During the ride, it is prohibited to: