Reconstruction works of metroline M3 will continue in the spring of 2020, by closing two metro stations situated in the city centre

Simultaneously with the reconstruction works carried out in the southern  section between Kőbánya-Kispest and Népliget along M3, reconstruction works on the section of Budapest’s city centre will start in the spring of 2020: from 9 March 2020, the Ferenciek tere and Arany János utca metro stations will be closed. From the above-mentioned day, metroline M3 will continue to be in service between Újpest-Központ and Nagyvárad tér on workdays, however the Arany János and Ferenciek tere stops will be skipped. The surrounding areas of the two closed stations will remain accessible by surface lines running in the city centre more frequently, such as tram line 2 running more frequently than usual, lines running on Budapest’s Small Boulevard (Kiskörút) (tramlines 47,49 and bus line 9 and at weekends: trolleybus 72) and buses operating on Rákóczi út (bus lines 5,7, 8E, 108E,110, 112, 133E and 178). In relation to the closure of the Ferenciek tere metro station, BKK would recommend new travel directions, among others, metrolines M2 and M4 for passengers arriving from and travelling to the Buda side. In relation to the closure of the Arany János utca stop, routes of trolleybus lines 72 and 73 will be extended to Deák Ferenc tér.

Please find more information on the metro reconstruction works at the dedicated website of BKK and BKV. Traffic changes and maps are available at: www.bkk.hu/m3felujitas while there are project details, news and interesting facts at: www.m3felujitas.hu.

Transport of Ferenciek tere and its surrounding area

Ferenciek tere and its surrounding area will remain accessible by the fixed-rail surface public transport network, such as by tramline 2 running more frequently at the Danube embankment, by tramlines 47 and 49 running at Astoria and also by bus lines running quite frequently on the route of Kossuth Lajos utca–Erzsébet híd. Tramline 2 is accessible, by transferring at Március 15. tér from buses running on Hegyalja út, Attila út and in South Buda (Dél-Buda). For providing convenient services, the vehicle fleet of both tramlines running along the Small Boulevard (Kiskörút) and also of buses running on Rákóczi út are equipped with reserve vehicles, if required.

In relation to the closure of the Ferenciek tere metro station, BKK recommends that passengers travelling from/to the Buda side plan their trip in advance, by transferring at the Deák Ferenc tér, the Kálvin tér or at the Astoria transport hub to/from metroline M2 or M4 or to/from buses running on Rákóczi út. 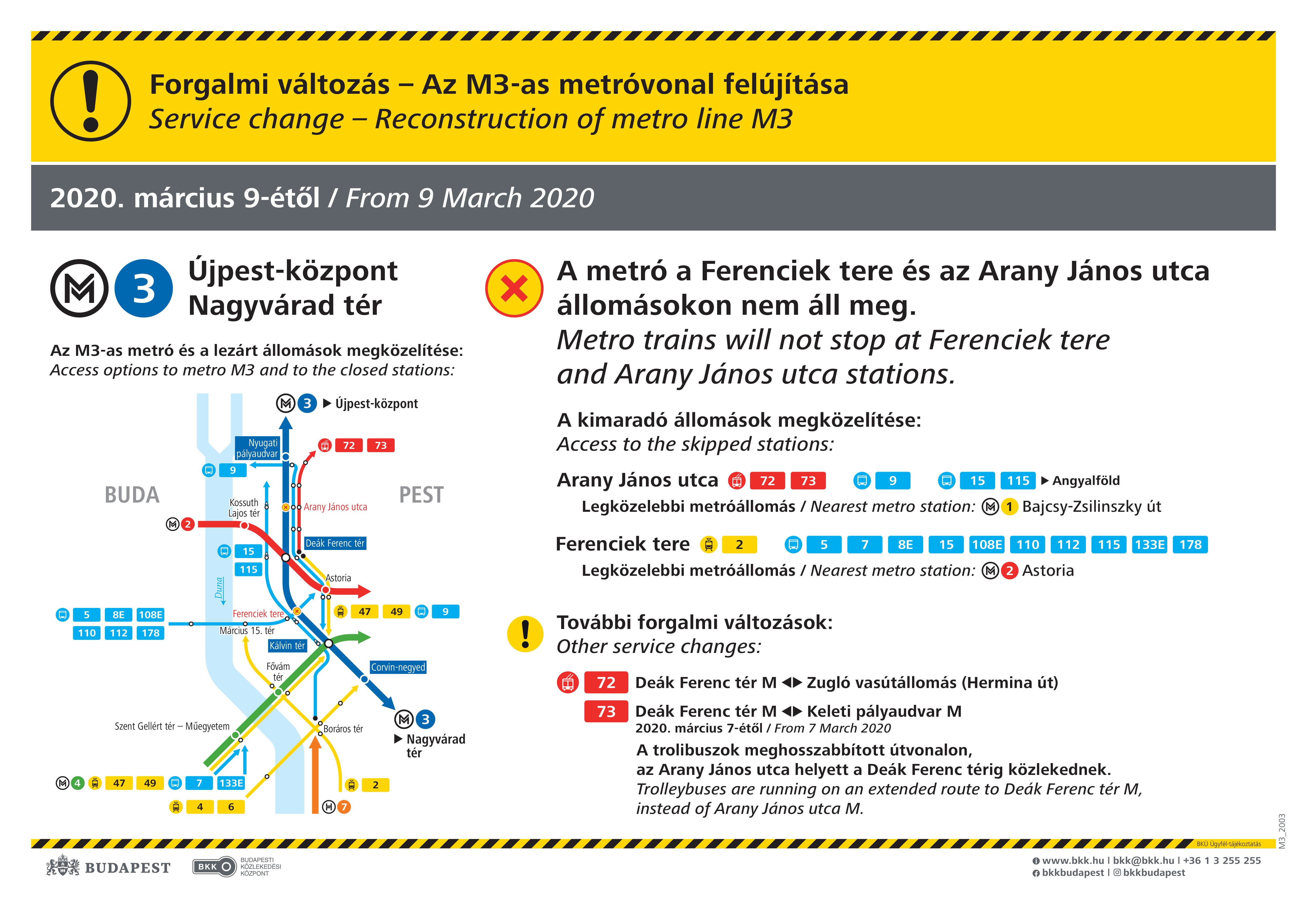 The surrounding area of the closed station is available also by

Transport of Arany János utca and its surrounding area

The surrounding area of the closed station is available also by 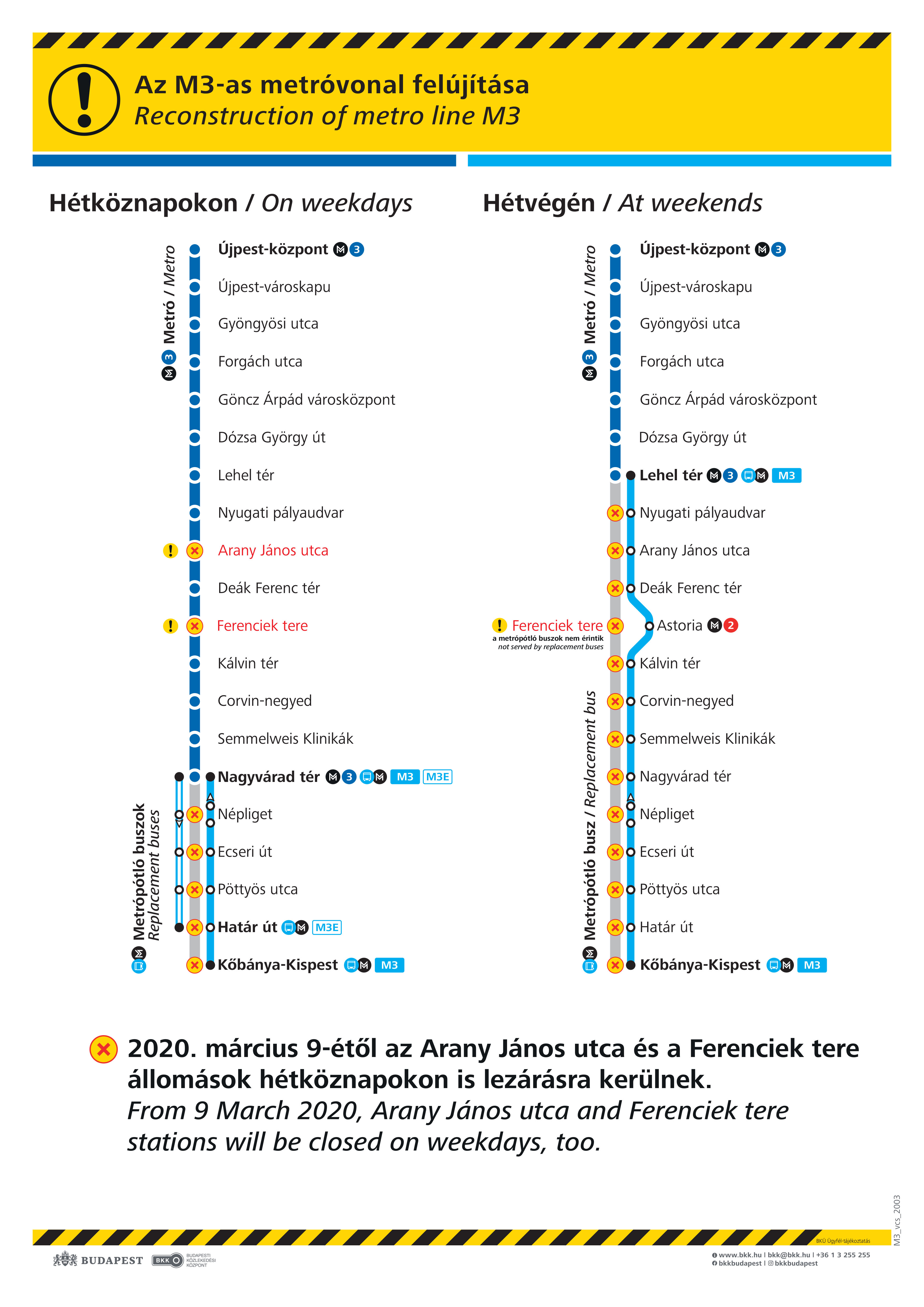 No need to validate a new ticket

Passengers wishing to reach the surrounding area of the closed stations are entitled to use surface lines running between Kálvin tér and Nyugati pályaudvar as well as buses running between Astoria and Ferenciek tere in possession of tickets validated on the premises of the metro.

Metroline M3 continues to run at weekends between Lehel tér and Újpest-Központ and stations skipped by the metro are replaced by buses. Please note that the replacement buses do not serve Ferenciek tere. Trolleybus 72 continues to run to Orczy tér.

For planning your trip, it is recommended to use the BKK FUTÁR app, which always offers the most optimal route for the accessibility of destinations, even during the closure of the Arany János utca and the Ferenciek tere stations, based on real-time vehicle data.

Reconstruction works of the middle section of metroline M3

The most difficult part of the metro reconstruction project is yet to come: the reconstruction of low-level stations pertaining to the middle section of the metroline (Nyugati pályaudvar–Semmelweis Klinikák). The section covering the city centre is the oldest-built section, which differs from the northern and southern sections both in terms of its structure and design.

The reconstruction works pose increased burden on passengers’ transport as well as on the car traffic, thus we would like to kindly ask for the patience, understanding and cooperation of passengers travelling along this section for the expected inconveniences.