Due to refurbishment works, tram line 61 runs on a shortened route

Tram line 61 runs on a shortened route between Móricz Zsigmond körtér and Zuhatag sor from 28 September 2013 (Saturday) due to the entire renovation of the bridge’s retaining walls situated at Zsemlye utca-Nagyhíd stop as well as the refurbishment of the 700 metre-long tracks between Vadaskerti út and Nyéki út in Völgy utca which are currently in an extremely bad condition. Replacement buses 61V are in operation between Széll Kálmán tér M and Hűvösvölgy.

Tram line 61 runs on a shortened route between Móricz Zsigmond körtér and Zuhatag sor from 28 September 2013. Between Széll Kálmán tér M and Hűvösvölgy tram 61 is replaced by buses 61V, which run every 5 minutes during daytime and every 2-3 minutes during peak hours.

To minimise inconvenience due to transferring between lines, replacement buses 61V are in operation between Széll Kálmán tér M and Hűvösvölgy on Szilágyi Erzsébet fasor via Hűvösvölgyi út partly in parallel with tram 61. Buses stop at Budagyöngye and Szent János Kórház between Széll Kálmán tér M and Kelemen László utca. To reach stops on this section, tram 61 is recommended. Replacement buses running on Hűvösvölgy út do not serve tram stops between Kelemen László utca and Hűvösvölgy terminus; bus stops are served on Hűvösvölgyi út.

We recommend passengers travelling between Széll Kálmán tér M and Hűvösvölgy take replacement bus 61V to travel comfortably and take tram 61 to reach their destination between Széll Kálmán tér M and Zuhatag sor. During the track refurbishment passengers need to transfer between tram 61 and replacement bus 61V to reach Hűvösvölgy and stops on Hűvösvölgyi út from the the Zuhatag sor, Akadémia, Nagyajtai utca, Városmajor and Nyúl utca stops.

We recommend passengers transfer between tram 61 and replacement bus 61 V at the Kelemen László utca stop when travelling towards Hűvösvölgy and at the Budagyöngye stop when going towards Széll Kálmán tér.

When transferring between replacement buses and trams, already validated single tickets (also of those within a block of 10 tickets) are valid for onward travel, but the other end of the ticket (the end without a number grid) needs to be stamped or punched with the validating machines, in the case of tickets from a block, the individual tickets have to be torn out to do this. Transfer tickets have number grids at both ends; therefore no revalidation is needed at the other end. 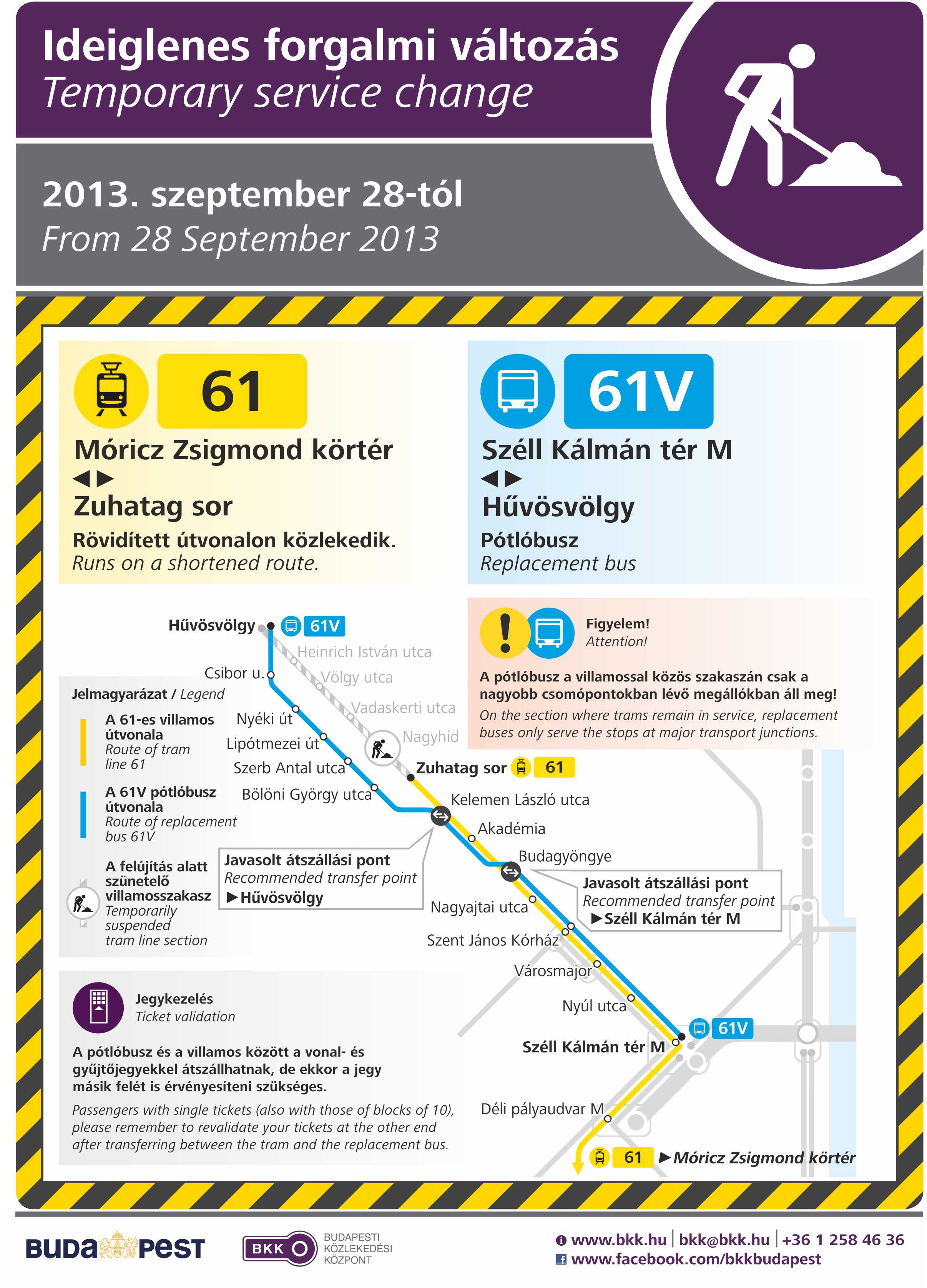 Track refurbishment on tram line 1 begins on Saturday, 28 September 2013. The first phase of the more than two-year-long development project concerns the section of the tram route between Bécsi út and Lehel utca, and involves the modernisation of stops and the upgrade of the power supply and signalling systems. During the first part of the refurbishment works to last until the middle of December, replacement buses will be in service: 1V will operate between Bécsi út and Lehel utca; 101V between Óbuda, Bogdáni út and Lehel utca while trams 1 and 1A will run only to Lehel utca coming from the direction of Közvágóhíd H suburban railway terminus and Népliget M metro station, respectively. The schedules of connecting public transport lines in Óbuda and Angyalföld will change and also road transport will be affected on Róbert Károly körút, as follows. END_OF_DOCUMENT_TOKEN_TO_BE_REPLACED

Following the successful pilot operation, BKK’s new public transport customer service points have been opened at Budapest’s international airport. The new customer service points help arriving visitors with information and provide booklets on public transport. BKK’s entire ticket and travelcard range are on sale allowing tourists arriving to Budapest to purchase 24-hour and 72-hour tickets at the airport or even other types of tickets, travelcards or passes. The customer service point already operates in its final layout at the arrival side of Terminal 2B, while its location will be finalised in the beginning of 2014 at Terminal 2A after the refurbishment of the arrival hall. Until that time a counter will temporarily serve the function of the customer service point at Terminal 2A. As part of the programmes of World Tourism Day, BKK provides English-language booklets at the international airport to assist arriving visitors with information on how to get around by public transport and also on special transport services. In addition to selling tickets, travelcards and passes, BKK attendants provide useful transport and touristic information from early morning to late evening from Monday to Sunday in both Hungarian and English. END_OF_DOCUMENT_TOKEN_TO_BE_REPLACED

This entry was posted in Appearances, News. Bookmark the permalink.