Budapest, 28 April 2022 – The reconstruction works of metroline M3 under process for nearly five years entered its last phase on 14 May (Saturday): the Nagyvárad tér and Lehel tér metro stations are reconstructed and made barrier-free and the subsequent accessibility of the Dózsa György út station is finalised, therefore the transport service in order so far has changed.

The most important changes in the transport of metroline M3 from 14 May are the following: 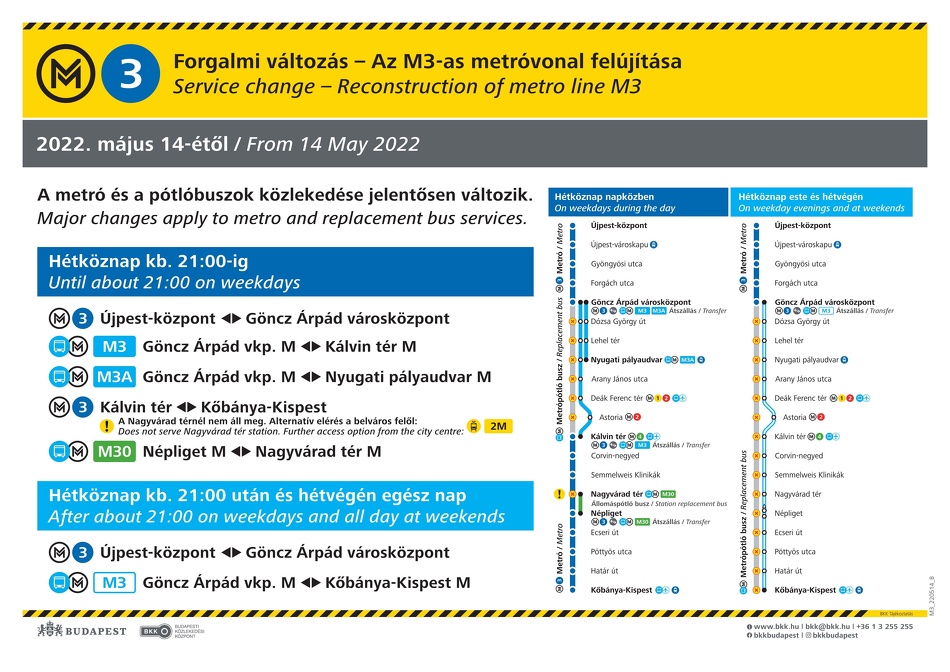 Please note that metrocars providing service between Kőbánya-Kispest and Kálvin tér skip the Nagyvárad tér metro station from 14 May (Saturday), due to its reconstruction works. Passengers can reach the surroundings of Nagyvárad tér by the station replacement bus M30 departing from Népliget, tramlines 2M and 24 running from the direction of the city centre and Keleti pályaudvar or by walking or hopping on a MOL Bubi bike at Semmelweis Klinikák.

Transport service during daytime on weekdays

Transport services on weekday nights and at weekends

Changes in sales points at some places

Due to the reconstruction works, the Nagyvárad tér and Lehel tér stations are closed, therefore BKK’s ticket offices operable on the inner premises of these locations are closed, too. BKK recommends that customers purchase mobile tickets available also in the BudapestGO app. Please note that BKK’s TVMs operable in the underground of Nagyvárad tér and in the underground and at the tram stop of Lehel tér remain operable. The personal sales points to be found the nearest to Nagyvárad tér are the Népliget M Customer Service Centre and the Kőbánya-Kispest M Customer Service Centre. The personal sales point to be found the nearest to Lehel tér is the Deák Ferenc tér M Customer Service Centre. Please note that there is even a mobile BKK point operable from 16 May (Monday) at the Nyugati pályaudvar stop of replacement bus M3 to Göncz Árpád városközpont. Please find BKK’s other sales points and vendors at BKK’s Sales Point Finder.

From 16 May (Monday), instead of the line 254M, the service of the previously-operable express line 254E resumes between the Népliget metro station and Alacskai úti lakótelep. From the vicinity of Pestszentimre, Boráros tér remains available by buslines 54 and 55.

Transfer point from busline 254E to tramline 3 is at the Nagykőrösi út/Határ út stop in the direction of the city centre, while is at the Ecseri út metro station to Alacskai úti lakótelep.

Busline 98E runs more frequently from the surrounding area of Rákoshegy and reaches Kőbánya-Kispest more quickly than before.

In the vicinity of Pesterzsébet, busline 223M remains in operation, providing quick service from Szentlőrinci úti lakótelep to Boráros tér. In the vicinity of Havanna-lakótelep, busline 194M continues to provide quick access to Határ út metro station from Gloriett-lakótelep. The routes of further lines affected by the metro replacement remain unchanged.

Due to the reconstruction works, motorists and public transport passengers should calculate with more complex access circumstances, especially those who reach the city centre on Váci út from the Northern parts.

Replacement buses are authorised to provide their service in a dedicated bus lane, likewise beforehand, therefore, motorists have less lanes for their trip on the section between Váci út - Lehel tér and Göncz Árpád városközpont. Due to the construction works, at Dózsa György út, two lanes are continued to be designated per directions, however replacement buses have priorities in the outer lanes. BKK would like to kindly request motorists to help replacement buses provide smooth services.

At Göncz Árpád városközpont, replacement buses heading to the city centre are authorised to pass two bus lanes in the intersection, therefore from the Northern direction from Váci út, no left turn to Róbert Károly körút is possible. From the Southern direction, turning is still possible from Váci út to Árpád híd. Buses turn at Petneházy utca on Váci út, therefore passengers should calculate with a speed limit of 50 km/h and traffic controlled by traffic lamps.

Replacement buses turn back at Kálvin tér via Szentkirályi utca, therefore on the section of Szentkirályi utca - Baross utca - Üllői út, a two-way traffic order enters into force and parking is not possible on the affected area. On this section of the street, motorists are still permitted to go to Baross utca, while to the opposite direction, only replacement buses are authorised to operate.

BKK Centre for Budapest Transport would like to kindly request both public transport passengers and other passengers using individual transport to not get about in the Hungarian capital in the upcoming weeks, as they have accustomed to, as several changes are expected during the metro replacement’s new phase. 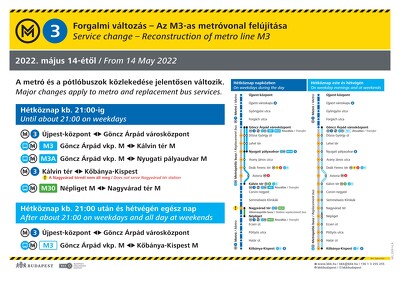